Posted on December 3, 2017 by Sonja Anderson 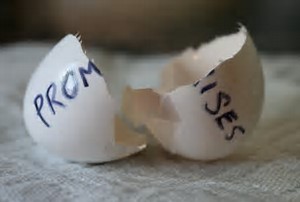 Maybe I’m being a little jaded, but it when someone makes a promise, what I actually hear is “I really wish I could do this,” or “I will try to make that happen.”

In a society where the first response to someone ‘fessing up to not following through on something they said they’d do is “No worries,” it’s hard to actually expect anyone to do exactly what they say they’re going to do, every time–or at least to make a really sacrificial effort trying. We quickly say, “No worries,” to indicate that we knew the task was going to be difficult, or that we empathetically understand that life is busy and we didn’t really expect them to do it, anyway. At least, that’s the way I take it.

What about God? The Bible, often referred to as “God’s Word,” makes a lot of promises. My grandmother once gave me a flip calendar of Bible promises. I was at an age where I was truly wondering if I could take God at his word.  What was he promising me anyway? I needed to know.

I had just moved to Japan, and I came across the verse “Delight in the Lord, and he will give you the desires of your heart.” I knew what my desires were, but there was a second part to this promise. I had a job to do! I was to figure out what it meant to “delight in the Lord.” (I actually wrote a story about this time in my life that was published in Cup of Comfort Book of Bible Promises, still available on Amazon). Long story short, and 25 years of marriage, two beautiful daughters and a career as a children’s author later, I figured it out at least a little, and God has certainly kept his end of the promise!

What promises has God made in his book that you would like to see fulfilled for you? Do you ever take God at his word, doing your part to get to know him, worship him, love him and others as yourself? Do you expect him to keep his promises to you?

Here are just a few of God’s promises to look up, and next week we’ll talk about his biggest promise of all!

Luke 18:27–All things are possible with God

Ezekiel 36:26–The promise of a new heart and new spirit

John 16:13–The promise of the gift of the Holy Spirit

James 1:5–God will give us wisdom

Proverbs 18:10–God will protect us

Revelation 21:4–The promise of an end to suffering and pain

Which ones resonate with you? Look them up. Is there something you need to be doing to, as part of the promise?

The image is from http://www.ministrybestpractices.com.

I write novels and short stories for children, and occasionally a book or article for adults, too. I grew up in Ohio, and I have lived in Chicago, Connecticut, Boston, Tokyo, and Seattle. The beautiful Pacific Northwest inspires me every day.
View all posts by Sonja Anderson →
This entry was posted in Faith. Bookmark the permalink.

This site uses Akismet to reduce spam. Learn how your comment data is processed.

Kyoto: An Aesthetic Perspective on Place

Sharing the hope I've found in the center of His wheel

A community of readers

A blog about London and its history...

The Power of Story

Lauri Fortino's Frog On A (B)log

Sharing and Celebrating Picture Books Since 2009

The Lost Crown of Apollo

Daily Thoughts and Meditations as we journey together with our Lord.

The Badger and the Whooping Crane

News about Wisconsin's wild places and whooping cranes, and the people devoted to both

The Amazing Call of George Markey from Farmland to Missions

"I write, not for children, but for the child-like, whether they be of five, or fifty, or seventy-five." George MacDonald